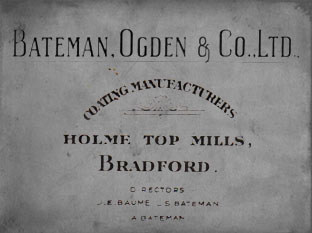 1956
The company moves from its original home at Holme Top Mill in Bradford to premises in the city's Peckover Street.

1966
The company moves from its Peckover Street location to new premises on Church Bank in Bradford. They expand on their now thriving suit length business.

1972
Bob Collins is invited to join Hugh Garnett at Bateman Ogden. With Bob’s expertise selling to the trade, the company begins selling fine fabrics to some of the UK’s most esteemed tailors.

1973
The company moves into new premises on Wakefield Road in Bradford - from where the business still operates today. Bob Collins is made a Director of the company.

2004
Bateman Ogden continues to grow and gains its first overseas export clients. Today, the company has 15 agents worldwide and exports to every continent.

August 25th 2011
Following a short illness the then owner Hugh Garnett deceased at the age of 79 after working full time in the company since the age of 16.

He will be sadly missed by all.

2012
Richard Lunn is made a director at Bateman Ogden. Bateman Ogden supplies fabric for use at the London 2012 Games.

2012-2022
Although the textile industry is sure to change over the next decade, Bateman Ogden is committed to providing the same high quality and service it has become renowned for throughout its rich history.